COWORKING AND WI-FI LAND IN DENTON 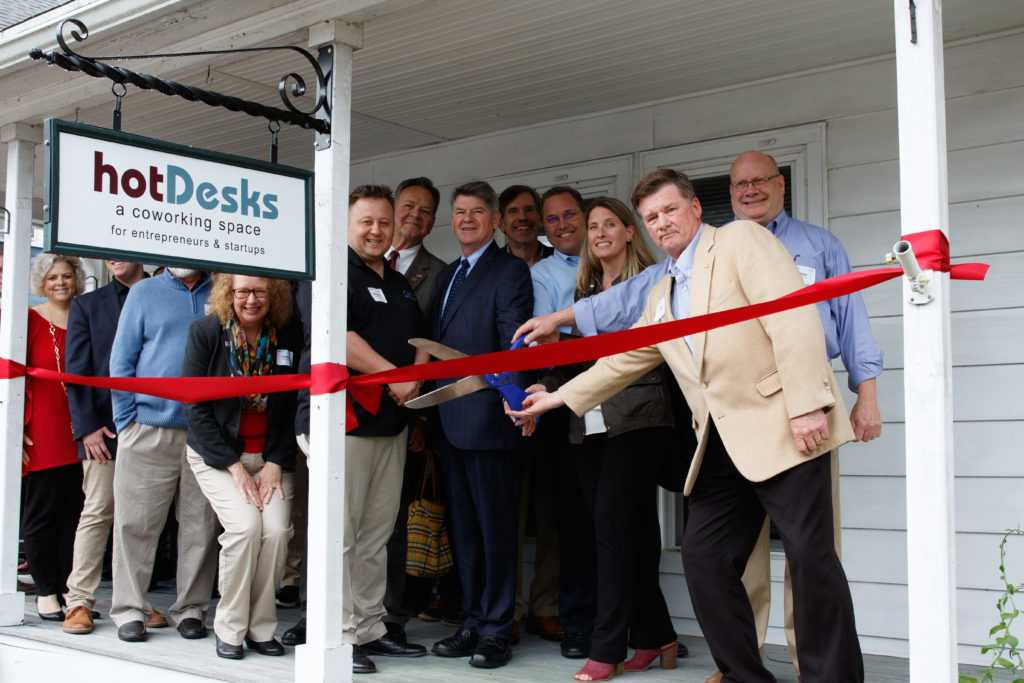 Downtown Denton rolled out the welcome mat for entrepreneurs and business start-ups May 13 with a ribbon cutting ceremony marking the opening of a sixth Eastern Shore hotDesk and Cambio Broadband. The two newest downtown businesses are located at 323 Market Street on the second floor of a building rehabbed with community block grant funds awarded from the Maryland Department of Housing & Community Development’s (DHCD) micro-enterprise program.

Economic development, government and business officials convened for a ceremony recognizing the debut of public wifi and new technology services to support entrepreneurs. Denton is the newest hotDesk location in the growing network of coworking spaces managed by the Eastern Shore Entrepreneurship Center (ESEC). Affiliates include: Cambridge, Chestertown, Easton, Salisbury and Pocomoke City. Cambio Broadband, an internet services provider specializing in wireless broadband, relocated their headquarters to Denton from Chestertown to meet the needs of an underserved market.

“The Denton hotDesk was made possible thanks to the efforts of many public and private partners,” said ESEC Director Mike Thielke. “The Town of Denton and the Maryland Broadband Cooperative have been diligent in making sure that the infrastructure was available for Cambio Broadband to bring internet access here so we could open our newest hotDesks coworking space.”

Mayor McNinch acknowledged the State of Maryland’s investment in rehabilitating the once blighted property and thanked Cambio for providing free wifi to Downtown visitors. The openings represent the culmination of an economic development project launched through a partnership of the Denton Development Corporation and the Town of Denton nearly a decade ago.

Kenneth Holt, Secretary of the DHCD, attended the ceremony and reiterated the State’s support for Denton, one of the Eastern Shore’s “Opportunity Zones.”

“As a former investment banker, I know that capital needs a place to grow and ideas need a place to incubate.,” said Secretary Holt. “Through Maryland’s opportunity zones, our department is able to provide the resources necessary for revitalization projects like this new coworking space and broadband headquarters to succeed.“

“Denton is fortunate that the ESEC saw an opportunity to expand their hotDesk network in our historic county seat,” said Mulrine. “We believe that the town’s next new business may emerge from a start-up or entrepreneur drawn to this new space and its high-speed bandwidth.”

Mulrine explained that Cambio is providing free internet to the facility and Downtown visitors.

“Cambio looks forward to being an engaged and proactive member of Downtown Denton,” said Cambio President and Founder Stephen Kirby. “We are confident that our broadband services will provide the technological edge the entrepreneurial and business community needs to thrive in this beautiful, historic shore town.”

After a ceremonial ribbon-cutting, guests toured the micro-enterprise facility. Cambio is headquartered in a single office on the second floor while hotDesks occupies two rooms. A third office houses the offices for Downtown Denton. A new snow-cone and sweets retailer is planned for the first floor.

For questions and additional details, you are welcome to contact the Eastern Shore Entrepreneurship Center — the administrator of the hotDesks coworking network.